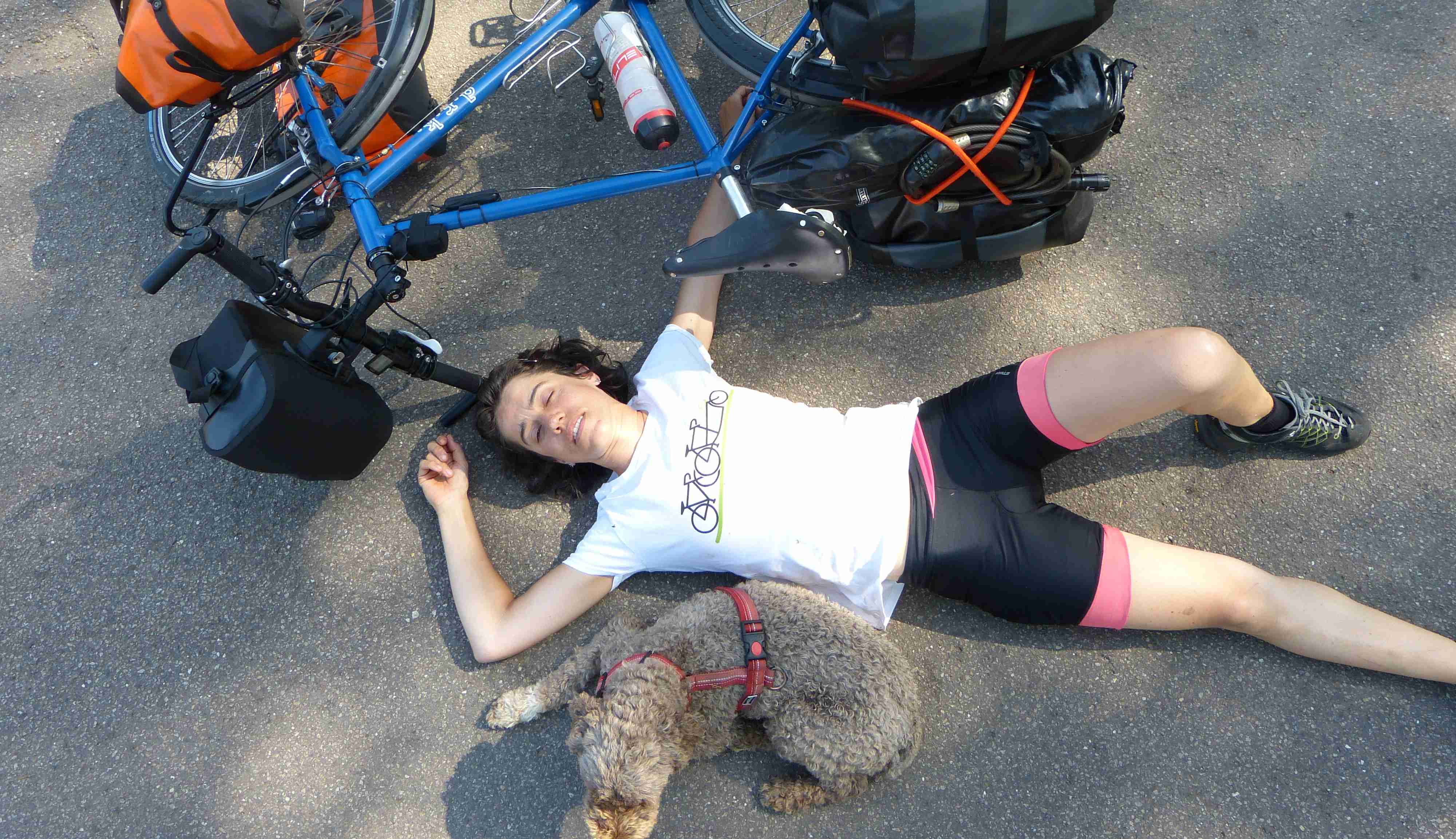 Cycling in the heatwave

I do not sweat much. In fact, I typically sweat very little even during sport activities. So, upon realising that what I was feeling periodically on my knees was actually sweat drops from my chin, I immediately understood that something was wrong. True - the hill we were climbing at the time was not insignificant, and the lack of tree shadow surely made things worse, as did the frequent lorries struggling past us on the hot asphalt, but the reality was that the temperature was a painful +38°C on that day. The chin dripping onto my knee was really a novelty for me. Thankfully some of us could enjoy frequent cooldown swims in dirty, but probably rather pleasurable, lake (or swamp) waters.

Given the heat, the contrast with passing ski slopes at a modest 1000 m of altitude couldn’t strike me more and made me wonder whether they could actually get any skiing going in winter in this resort near Jougne (on the Swiss-French border). The owner of the campsite where we stayed that evening, while harshly commenting on the French government inaction towards climate breakdown, confirmed that skiing in Jougne was a bit temperamental these days. At least we were pleased to hear that some people are aware of how bad the situation is.
Quite funnily, or perhaps rather sadly, even technology and infrastructure were protesting for the heat. While my Samsung phone was refusing to charge, spitting out the message “Your phone temperature is too high. Charging will continue when the temperature returns to normal”, some regions of asphalt were producing small sticky black bubbles (perhaps stemming from asphalt tar?) that popped as our tires passed over them, just like bubble wrap does. There was even the time when, over lunch - admittedly a prolonged lunch - the stand of Daniel’s bike made a deep hole in the tarmac… and the bike eventually fell to the ground.
It really was not fun to cycle in these conditions. But we pressed on and in the hottest day we ended up carrying 18 litres of water (!) to survive through the night while wild camping.
This July heatwave set record month temperatures for a bunch of European countries (Belgium, Germany, and Netherlands), just as the June heatwave did for others (Czech Republic, Slovakia, Austria, Andorra, Luxembourg, Poland, Germany, and France). Yet there are still plenty of people that don’t look at the science, but rather reason in terms of simple feelings. Sure, summers have always been hotter than winters and yes, sure, probably in the 70s or 80s there have been a few years that stood out as particularly hot compared to other years. Yet, we don’t have to rely on the memory of bodily feelings to know that the global average temperature has increased, given that, thankfully, we can use thermometers - even carefully calibrated ones, like those in metrological research institutes.
Scientists are trying to convey the message of a fast warming world to the widest possible audience. For instance, I came across this beautiful and simple representation of the change of temperature, realised by the Institute for Environmental Analytics. I reproduce below the image which corresponds to the situation for Italy from 1901 to 2018. Similar images can be visualised for any country as well as for the whole world.

Here, each stripe represents the temperature in Italy averaged over a year. For simplicity, there are neither numbers nor scales, as the only information that one needs to know is that blue means cooler than red. This is an example of what everyone needs to see and what media and press should frequently report through their channels in order to create awareness of climate change among people. In fact, simply referring to the heatwaves as “climate emergencies” may already be something that we all should do - me included.