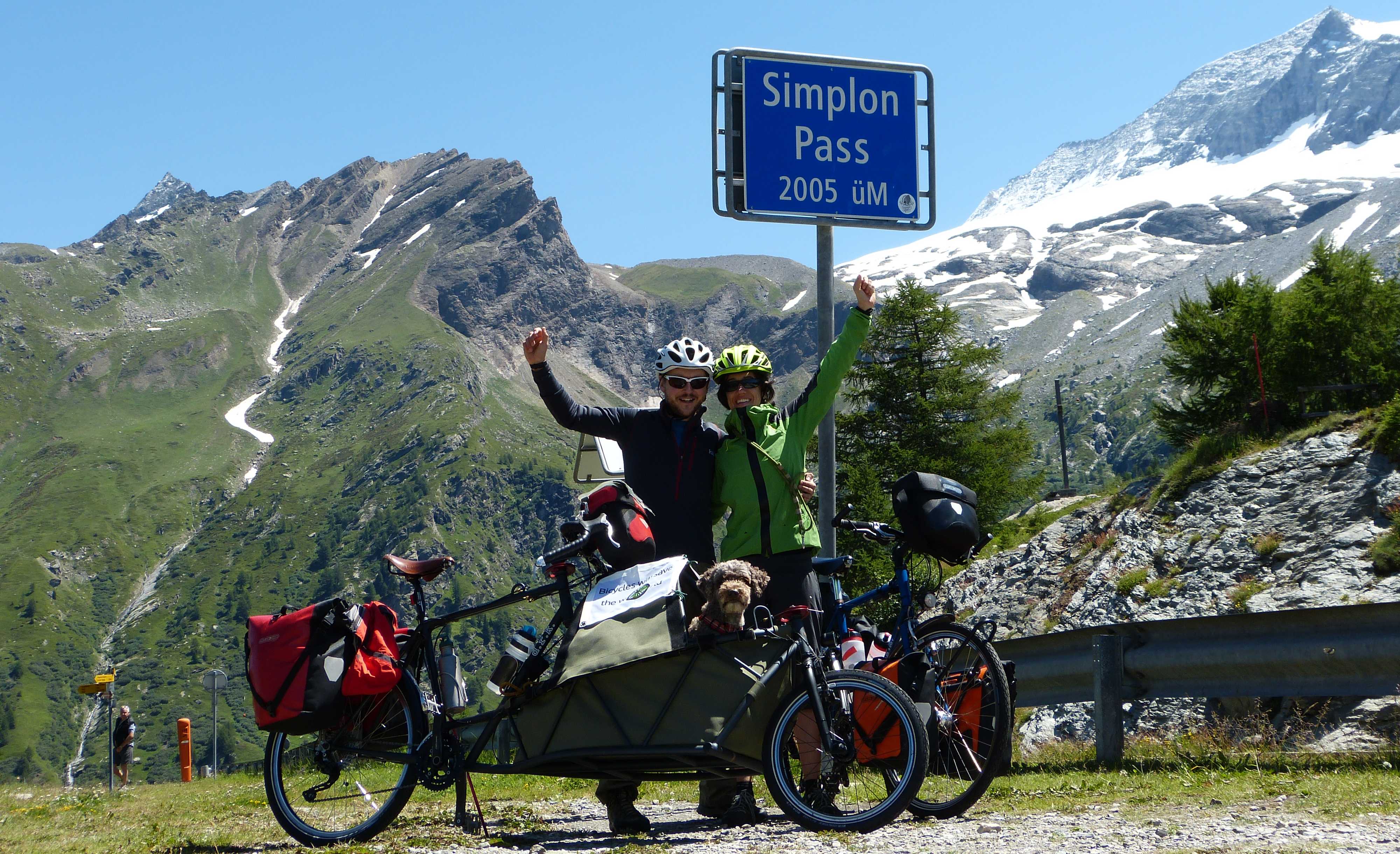 We didn’t choose an easy start. Setting off to cross Switzerland on the first week of our trip was, with hindsight, a crazy decision. The remarkably high percentage of people with dropped jaws that saw us climbing towards Simplon pass confirmed the madness of our endevour. Yet, we thought that if we could make it to Simplon pass, then nothing could stop us afterwards. We took it as a test… And what a test it was!
With a road busy with trucks and fast cars and our painfully low average speed of only 5 or 6 kms per hour, the climb to Simplon pass was hellish. On top of that, the far too frequent tunnels with total lack of hard shoulders made us feel way too often in danger. At about mid climb, a truck came so close to us that we decided to give up. Well, not completely give up, but we opted instead for the footpath. Which, of course, being a footpath involved lots of uneasy terrain, and even stairs! This was one of the few circumstances in which I wasn’t upset with all the time Daniel spent in his gym… I sat watching while he carried everything up and down narrow metal stairs! Zola, being able to trot along us and cover herself in alpine poo, was also very happy with the footpath choice.

It took us two days to get to the top (2005m), which was glorious and totally worth the massive coffee rip-off… and the fast descent into Brig made us forgive all the harshness of the climb. So, we passed the test and felt invincible. Plus, we were finally in Switzerland!
Going through the Valais to reach Montreux on Lake Léman was easy and fast. Swiss national cycle route #1 follows the Rhône river through the wide valley and, while not crossing particularly picturesque areas (indeed, more like industrial estates), it made us cover quick kilometers.

The scenery changed substantially from Montreux onwards. Here we went up the hills again and what a lovely lake view we had, surrounded by terraced vineyards and old stone houses! It reminded us of Italian Cinque Terre.

Lausanne was next and completely by chance we found ourselves crossing its beautiful University campus, which allowed us to exploit our Eduroam account for free WiFi (not to be undervalued in Switzerland!!). It felt weird being in a campus again. I mean, nice weird - like being at home almost. In a moment of tiredness I found myself daydreaming of a possible future life as a researcher again, perhaps living in the countryside around Lausanne and working there… of course commuting by bike. All around us physics and maths formulas were printed on walls as well as the longest set of decimal numbers of π that I had ever seen…
But Zola brought us quickly back to reality: “Guys!” - she said - “stop daydreaming! We have a duty here to fulfill, so let’s get on with it!”. While we guessed that her prompting us to get moving was mainly due to her wanting food at the end of the daily cycle, Zola was right. We had a bloody bicycle still to draw! So, off we went again, pedalling the last few tens of kilometers towards Vallorbe to cross into France through another pass (only 1100m this time).