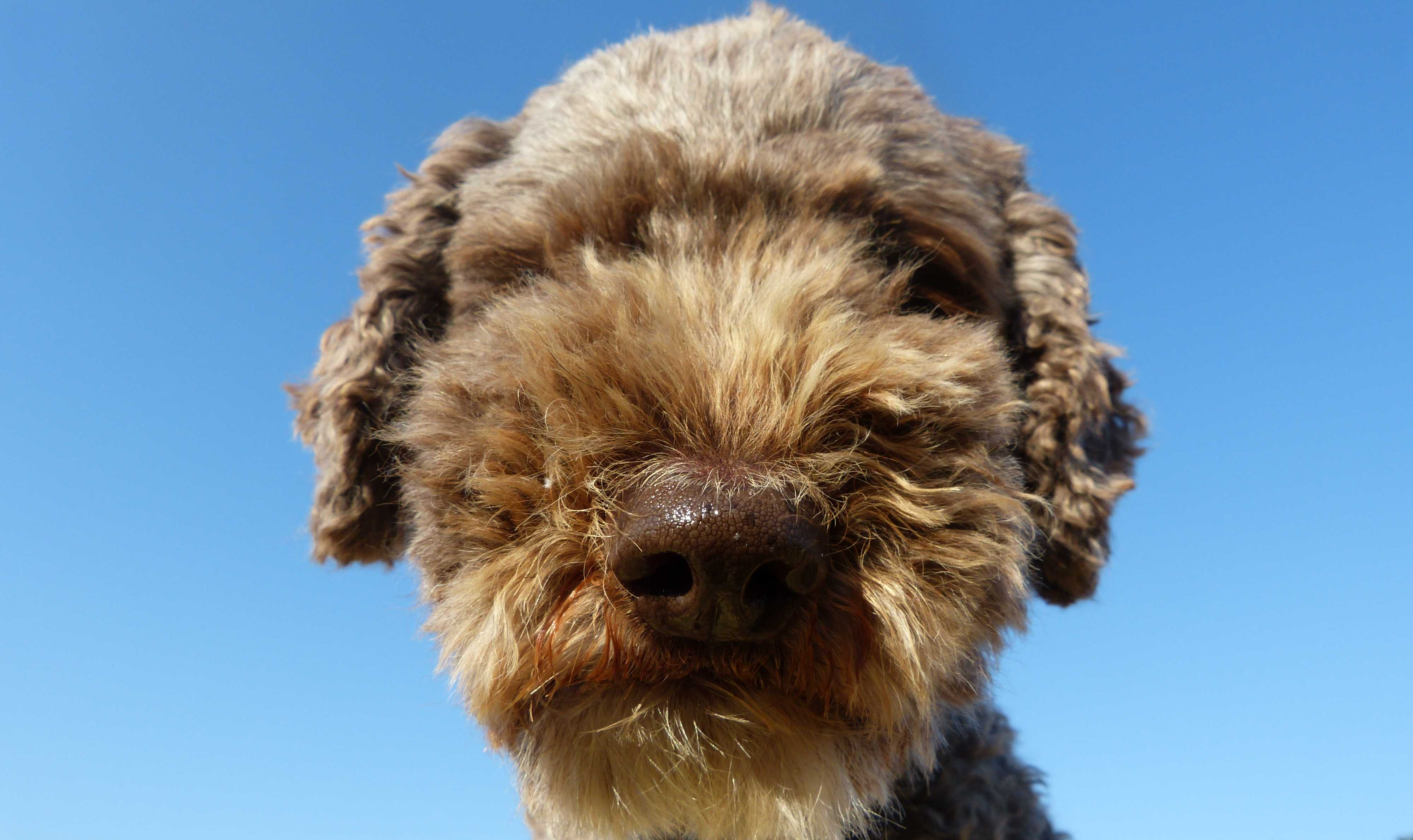 It may be the wrong time for me to share my thoughts, as I am slightly annoyed at my humans at the moment and my views may not be entirely fair, but after such a long silence I think it is about time for me to write something about my adventures.
You want to know why I am pissed off? Well, if you read carefully the previous post you may already have guessed… YES, I have been trimmed a few days ago! By a French lady!! And what is more, she was so diabolically happy about it!!!

I did hear several times Arianna trying to explain in her broken French that I was a Lagotto, and not a poodle… but there must be a deep-seated desire for any French hairdresser to turn a dignified curly-haired dog into a poodle-looking thing. And so there I was, only an hour later, trotting away with some stupidly fluffy long ears. Thankfully nobody knows me around here…
Looks aside (I think I am always beautiful anyway), I am also profoundly outraged that nobody checked the forecasts before taking me for a haircut. It so happened that the temperatures dropped by ten degrees the day after, with not much hope for the heat to come back anytime soon. And with my 3 mm short hair, I am now too cold even inside the tent!

Prior to this abominable event, I must admit that I have been very happy with my new lifestyle. I had never been on the road for so long, and I knew that Arianna and Daniel were slightly concerned that I could become desperate for a more sedentary life, but the truth is that I was born to travel! So, I adapted without a problem to my new routine and, in fact, I grew even more fond of it.
I particularly love the cargo bike: I am a very picky and pedantic dog, but I must admit that Daniel nailed this one. The cargo bay is smaller than my old doggy trailer, but big enough to allow me to move around, sit, stand and even lie down. A minor annoyance is that I have to share this space with a few rolls of toilet paper, which apparently my humans cannot spare. Of course, through riding the cargo bike I have had to learn to lean into road bends (even quite abruptly) but that has not been a big problem for me, and indeed I think my leg muscles got more toned as a consequence: it’s like being on a proprioceptive board for several hours a day!

But the best thing about the cargo bike is, by far, the fact that I can be at the front and see everything comfortably, without needing to stretch out - which was my problem with the trailer. With this in mind I was outraged when I understood that Daniel was going to be my chauffeur, and not Arianna, whom instead used to be carrying my trailer. In point of fact, my humans have always cycle-toured in a regimented pattern: Arianna first, followed by Daniel. Always. Which doesn’t make sense as Daniel has always been navigating… but this is another story. So then, what would have been the advantage, in terms of my viewing pleasures, if rather than been carried in the trailer by Arianna, I got instead to travel at the front of the cargo bike with Daniel? Absolutely NOTHING.
And in-fact I complained. And complained. And complained. After over three weeks of winging and tapping my feet furiously every time Arianna was riding away from us, even only by a few meters, I finally got my way. Yes, I successfully managed to disrupt a well established travelling arrangement to fulfil my desires: this is what I call proper human training.
But let’s face it: I am the real star of this trip, so it is only fair that I get to travel at the front, also because I am much more noticeable in this way. Indeed, thanks to our new touring style, the number of “Superbe!”, “Regarde le petit chien!” (“Look at the small dog!”), and “Magnifique!” that are shouted at us as we pass in front of people, has substantially increased. And the same has happened for the treats that strangers offer me! A win-win situation.
Seeing how comfortable and happy I have become in my cargo bike, Arianna and Daniel have also started to trust me more, and now I get to travel without the lead! There are still a few situations in which I can become agitated, for example when I see cats, and then I loose control of my feet and start tapping them in an excited dance, but I am generally very well behaved. I can jump in and out of the cargo bay on command (if accompanied by a tasty treat) and this has made it easier for me to trot alongside the bikes, which I really love!

The amount of time I get to walk each day really depends on the nature of the roads we use. I am not trusted enough on big roads with cars - quite rightly, as I am easily distracted by various smells and food - and so my humans try to travel on smaller roads or unpaved paths as much as possible. But regardless of whether I can walk for over an hour or for only a few minutes, this whole nomadic lifestyle experience makes me very tired! Us dogs need to sleep on average 13 hours a day, plus about 6 hours of what I call “napping”, which consists in lying around awake doing nothing. But I don’t rest this much!! In the cargo bike it is impossible for me too sleep… too many interesting things passing by! So I tend to relax only at lunch time and in the evenings.

I usually manage to stay awake just until dinner and then I immediately ask to be let inside the tent; I even refuse to do the last pee! While they finish with their day chores I can finally enjoy some alone sleeping time, with unmatched freedom to place and expand myself in whichever direction I like… But when they both get in, all of the sudden the tent becomes too crammed and I get segregated at the bottom of their feet, no matter how I voice my disapproval (I growl a lot). And yet I did state that the tent was going to be too small for the three of us!

So over the weeks I have devised and refined a strategy to gain more space. From the bottom of the tent I slowly creep up during the night in between their sleeping bags; I then carefully position myself in such a way that I can push Arianna towards one side of the tent with my paws and Daniel towards the other side with my back. I thus manage to create a little rectangular space in the middle of the tent where I can fit just fine. And sometimes through this manoeuvrer I also manage to steal a bit of Daniel’s sleeping bag!

Regarding the final important aspect of the trip, which is food, I have to say that my humans are exceeding my expectations. I am fed loads, two or even three times a day, and I feel quite full. Sure enough, I have stopped begging for food so much and I jump over street food that I sniff out with much less enthusiasm. But I have to be careful, as I heard the other day that Daniel noticed these changes and he suggested to take me somewhere to be weighed to see if I became fat. I even heard the word “vet” being enunciated… Please help!! I am so worried! I am sure I put on weight and I don’t want to go on a diet!