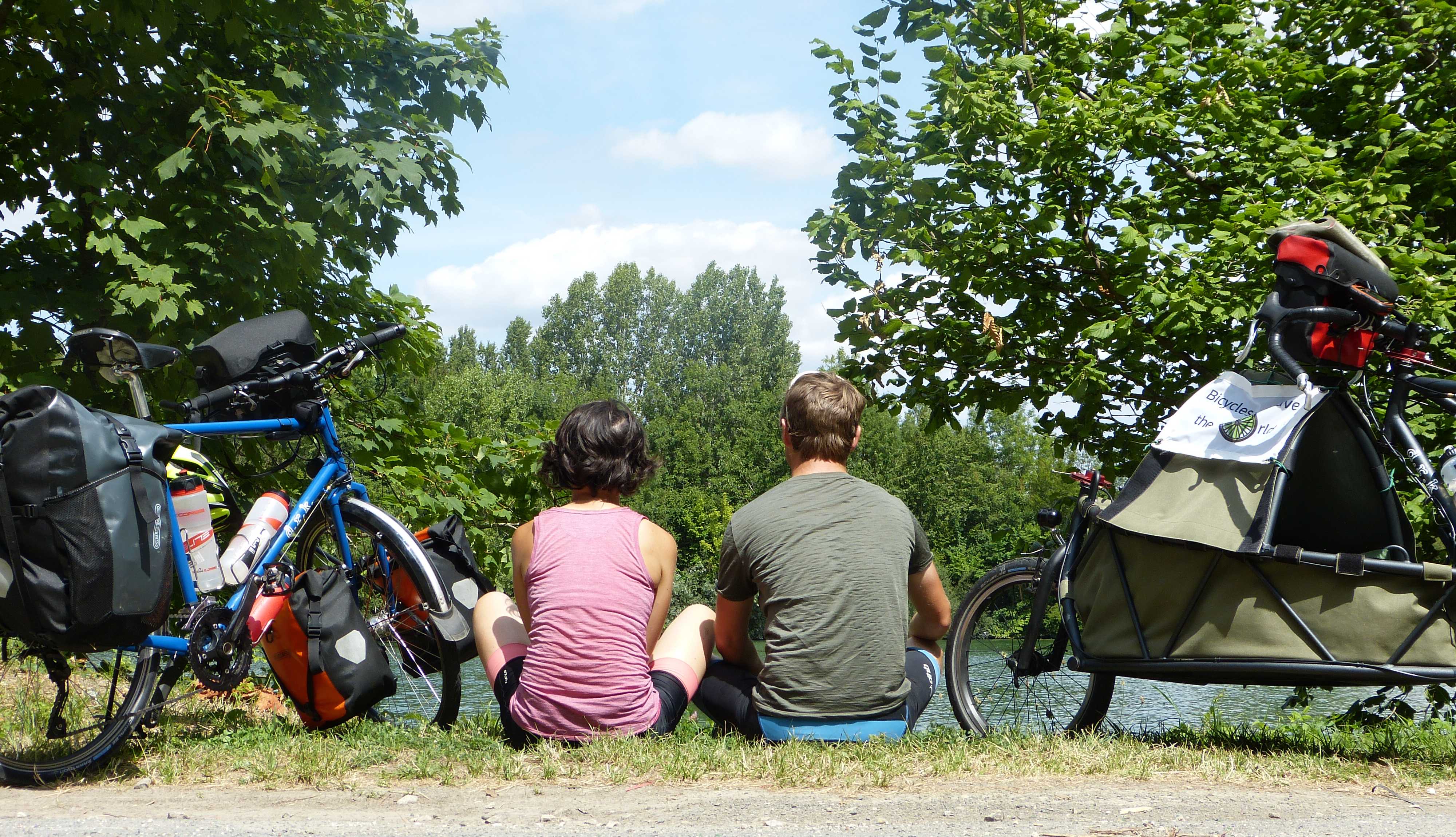 French people love to say “Bonjour!”. The number of times every day we enunciate the magic word is indeed countless. And of course we enjoy saying it back, usually followed by a quiet smile. Even if by now we are accustomed to this polite French habit, Daniel was still taken aback one morning when, entering the bathroom of a campsite near Fontainebleau - at the beginning of the fork - he heard a loud and confident “Bonjour!” coming from inside a closed cubicle. After a little hesitation he responded, although probably in a more sheepish tone (thankfully I wasn’t there to check).
With this blessing, we set off to draw the fork, which crossed the forests of the Parc du Gâtinais Français at the beginning, and continued through the departments of la Loiret and Cher, both part of the Centre region. When I understood that we would be crossing the Loire valley, I got excited with the possibility of seeing lots and lots of castles… with childish eagerness I was already dreaming about peaceful cycling along the Loire river, while spotting majestic castles dotted along the way. Unfortunately, I then realised that our route would run almost perpendicular to the Loire Valley (damn my rushed route planning!!), and my longing for fairy tale castles had to make do with seeing only the castle of Sully-sur-Loire - which was anyhow reasonably magical, moat and all.

We then learnt, by speaking to locals, that cycling along the Loire valley (“La Loire à vélo”) has become so popular in recent years that the route is completely packed with cyclists and the local authorities are trying to divert some of the traffic by encouraging people to take up canoeing(!) instead of cycling. Funny how most places have the opposite problem, that of finding ways to get more people on their bike (perhaps a quick solution would then simply be to build huge castles everywhere??).
Gâtinais forest and Sully-sur-Loire aside, the rest of our cycling through the fork was admittedly a bit dull, at least for what concerns the landscape. Most of the time we found ourselves cycling on very straight roads and crossing vast farming land that was incredibly flat. We could spot low rolling hills only in the far distance. It was certainly good for our mileage and for getting our legs stronger in view of more difficult sections, but we were so bored and really hoped for some variety of scenery.

But variety didn’t come and, in-fact, we had to do it all twice! I swear next time we draw something by bike (I guess it will happen) I will be more careful with the routing, especially for the sections that we need to cycle more than once!! It was a bit surreal cycling through a random road, in the middle of nowhere sensible, some 50 km south of Bourges, and suddenly doing a U-turn to go back exactly the same way. Even Zola looked at us in bewilderment!
To add to our sense of gloominess through this section, everything was dry. We crossed so many streams and ponds with signs stating “Bagnaide interdite” (Swimming prohibited) where, ironically, there was not even enough water for a bird to take a wash. Some were indeed completely arid and one time, during a break, Zola loved digging in the soft sand of what once was a river bed. Furthermore, in the few forests that we crossed, ferns in the undergrowth were horribly burned - partly from the heat and partly from the lack of water.

During these days the front pages of several local newspapers were covered with news of drought-related issues, and the people we spoke to seemed very concerned. We are not sure if some formal action was being taken to tackle the problem, but we ourselves never experienced lack of running water anywhere we stayed, so probably the surrounding water tanks, that stood high above the flat landscape, were not empty yet. This overall situation brought to my mind a painful article that I read in the Guardian a few months ago, which reported on predictions of the Saharan desert expanding into southern and central Europe by the end of the century, if emissions don’t come to an halt. A pretty gloomy future indeed of which, I believe, we are already seeing many signs.
Luckily, on our way back up the fork, the rain eventually came. Not much, but just enough to make us stop and enjoy the warmth of a café in Aubigny-sur-Nère, which on second sight was actually quite a pleasant town with a lively high street. After 26 days of cycling, this was the first proper day of rain and we could finally test the cover of the cargo bike. The latter had been hand-made by an upholsterer near our home, and we were happy to tell him that all his stitchings and velcro withstood the rain pretty well! Zola however was not too happy to sit inside her watertight capsule for too long, even if we designed front and rear transparent windows for her viewing pleasures, so she ended up sticking her head out of the cover… and then goodbye waterproofness!! We will have to work on that.

Despite the dull landscape and the lack of physical challenges for our cycling, we did notice some more amazing features of the French society during these days. Upon entering the bigger villages or towns, it was impossible not to notice the quantity of signs marking directions to a series of “municipal” facilities, such as the “salle polyvalente” (multi-purpose sport hall), the “salle des fêtes” (party hall, yes indeed!), the “lavoir” (wash house), and of course the campsite. These are all places that belong to the community as a whole, and are kept with remarkable cleanliness and respect by all the people using them. In some places we even found signposts for the “municipal forêt” (municipal forest) and the “municipal étang” (municipal pond), where it is possible to fish! All this contributed to a growing feeling that the sense of community here in France is pretty strong.
We are particularly enjoying the municipal campsites, which appear to be literally everywhere (seriously, given the density of municipal campsites alone, France must be the country with the highest number of campsites in the world!). They provide a safe and no-frill place where to pitch a tent and have a shower, at a ridiculously cheap price (we once paied as little as 4€ a night for the three of us - the same as one coffee in Switzerland). The wash houses are also awesome! We have them in Italy as well, but they are not as pretty as the French ones. The latter are usually inside small stone buildings and covered by wooden roofs. Flowers typically hang from arched openings, making them even more picturesque.

But the best bit of the fork was, without a doubt, the tiny village of Saint-Loup-des-Vignes, where we stumbled across, once more, completely by chance. For a while we had been wanting to cut Zola’s hair quite short, since it was still so bloody hot, but the few dog hairdressers we had found were almost outraged when we asked if Zola could be trimmed on the day. Apparently French dog coiffures require over a week for booking, at least in summer. But maybe that’s the case everywhere… we don’t know, as Zola has always had the luckiness (or misfortune, depending on who you ask) of being home-trimmed by us… So, when in Boiscommune we finally found a very smiley lady saying that she would get the job done for the next day, we decided to stop! Only that there were no convenient campsites around and we didn’t fancy wild camping for two nights in a row. So we decided to try and use “Gamping”, a website that lists private land on which you can camp for a moderate price. It is in this way that we ended up staying in Saint-Loup-des-Vignes and had the pleasure of meeting Patrick and Françoise!

Patrick and Françoise were generous, hospitable and genuinely awesome people, those of a kind that is becoming increasingly more rare to find in our time-rushed and money-driven societies. Both retired social carers, they now enjoyed meeting new people through Gamping and taking care of nature; indeed their barn and surrounding land was listed as one of the “Refuge LPO”, a French association created for the protection of birds. Being keen environmentalists, they were very interested in our project, and hearing about the difficulties we were having of publicizing it, they did anything they could to help us. After several phone calls to friends of friends of friends of journalists they managed to set us up for an interview with “La République du Centre”. And there we were, the next day only, finally speaking about our project to a French journalist!

We then understood that our strategy of getting visibility by contacting local authorities and asking to meet was probably not the best one… indeed, until now nobody has even cared to decline our requests! Too busy people, probably. Journalists, however, must always be in search of good stories, and we certainly can provide a crazy enough one. Let’s see what we will manage in the future. In any case, thanks to Zola and her long hair for having forced us to stop and meet the wonderful Patrick and Françoise - a true inspiration!