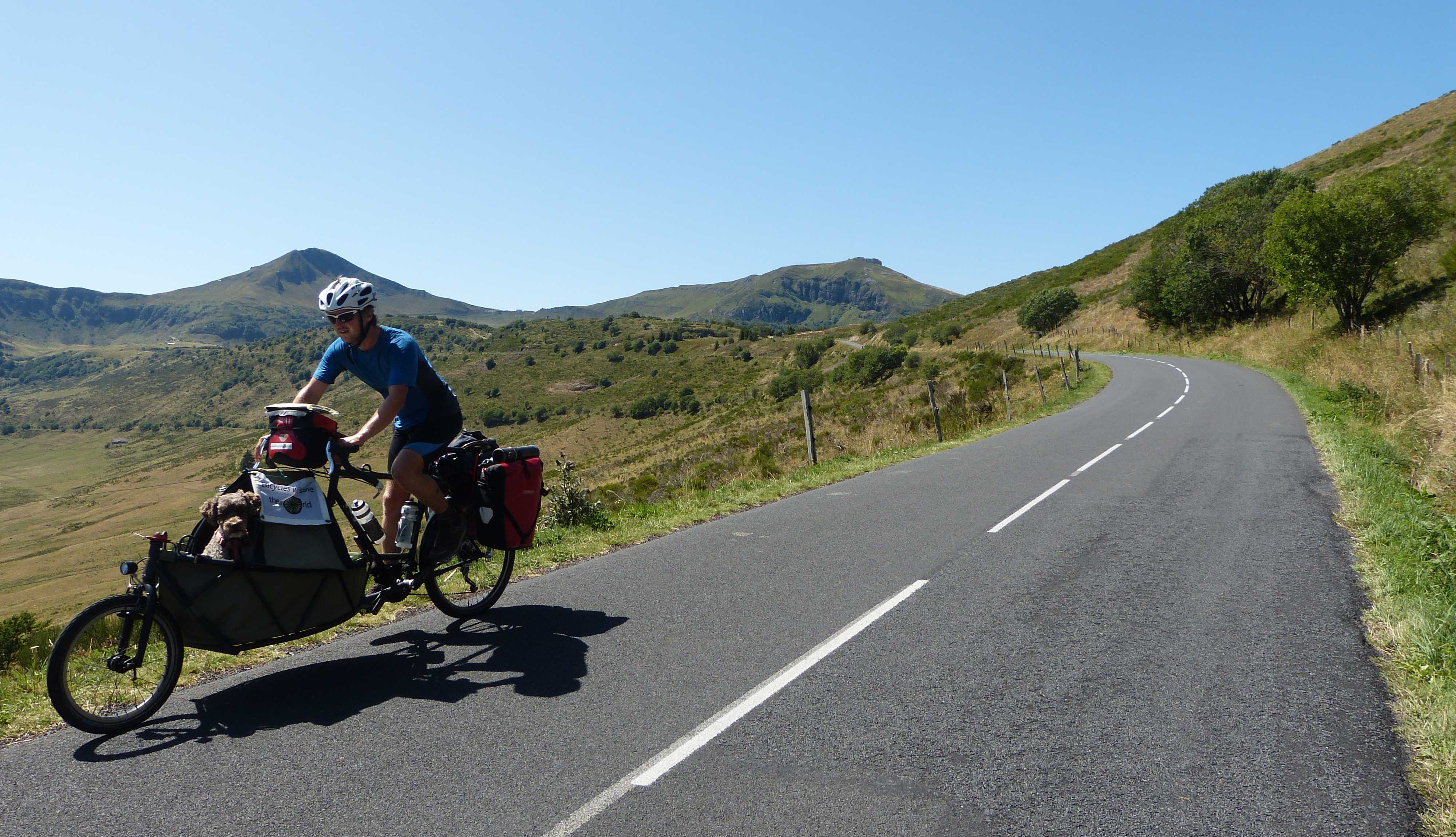 After resting for a couple of days in Saint-Loup-des-Vignes and with a few hundred grams less to carry with us (Zola’s hair), we were ready and happy to tackle the front wheel. Upon passing once more through Boiscommun we stopped at the local bar-tabac to buy 3(!) copies of the French newspaper La République du Centre, where our project got featured in an article, under the tag “unusual” (we were grateful it didn’t go under the tag “mad”). It felt surreal when the cashier, beaming, made it clear she had recognised us by pointing to our picture within the newspaper!

So we left the flats of the Loiret department with a bit of fame before entering, once more, into Bourgogne. After only a couple of days cycling, the landscape evolved substantially and we found ourselves travelling through soft rolling hills that reminded us of Tuscany. The weather also changed abruptly and the temperatures dropped by 10 degrees, leaving the heat behind like a long-forgotten feeling. Only Zola was unhappy about the new climate, but of that she already complained profusely in her own post.

Our route took us through some scenic wine villages along the river Serein: Chablis (which apparently gives the name to a very famous French wine), Chemilly, and medieval Noyers - which was really beautiful with its narrow cobbled lanes and timber houses.

In Toutry, further along the river Serein, we were just about to start cooking when we made a tragic discovery: we couldn’t find a piece of the stove. We realised that I had left it on some grass the evening before, a whole 80 km back along the route. With this, the number of items already lost during the trip increased to an appalling 6: two Zola’s leads (yes, two!), one fleece (mine), a camping adaptor (my fault again), and Zola’s thick coat (which luckily was brought back to us by a kind man that chased us with his car). But the stove bit was by far the worst, especially for Daniel!
Yes, because Daniel (and I suspect most British people) does not understand the concept of a cold evening meal, which we had to resort to given the total absence of eateries in Toutry. Furthermore, the lack of warm coffee in the morning turns Daniel, by default, into a somewhat intractable person for the rest of the day. Adding to this the fact that he developed neck pain through the night (probably due to food-related nightmares), one can only imagine with what a grumpy man I had to deal with for the next few days! Until when, finally, we managed to buy another stove. It was crap, but it did the job.
After these mild difficulties, we were thrilled to meet my aunt and uncle, and their dog, who came all the way from Milan to meet us in Saint-Jean-de-Trézy and spend a couple of days with us. They did the journey by car, of course… but then the moment that someone in my family will stop using their car may well coincide with the moment hell freezes over and a squadron of low-flying pigs crosses the horizon - preferably at the same time.

With my aunt and uncle we visited Chalon-sur-Saône and Cluny, and we stayed for one night in one of the most ridiculously posh places we had ever been (they paid…). It was quite a dramatic change from our basic camps to having intelligent toilets that can do a bidet for you once you are done with your business. We also estimated, to Zola’s utmost delight, that the bed alone was three times the floor area of our tent. After such a good night sleep even Daniel’s neck was entirely fixed!

To assess the extent of Zola’s desire to be on the road with us, we put her through a small experiment: we let her travel in the car with my aunt and uncle for an entire day, meeting her at a series of pre-established stops along the way. Every single time we rejoined, Zola indicated she wanted to jump into the cargo bay, and when the car was slowly travelling behind us, she stood alert on the front armrest - a bit like a sentinel marmot - making sure not to loose sight of us. We were happy that her eagerness to be with us, even on a wobbly cargo bike, overcame her predilection for comfort and warmth (she is a spoilt dog), and from then we stopped doubting her enjoyment of the trip.
After saying goodbye to my aunt and uncle, we pressed on to tackle some hills that became progressively more demanding, through the regions of Rhône-Alpes and Auvergne. We learnt that the area we were crossing was known as the Massif Central, a sequence of mountains and plateaus, of volcanic origin, which granted some of the best views of our journey so far.
The first few days of climbing through the Massif Central were particularly difficult due to cold weather, frequent storms and heavy rain. During an exceptionally bad evening, the campsite owner where we were staying offered us to pitch our tent under a big tarpaulin, and we took the opportunity without hesitation. It would have been quite a test for our tent otherwise … but we were happy we didn’t have to go through it!

One other day we were cycling through Ambert (famous for its blue cheese “La Fourme d’Ambert”, and unsurprisingly twinned to the Italian city Gorgonzola) when we got soaked so much that we decided to spend a few hours in a self-service laundry - perfect for warmth and drying clothes. Unfortunately we didn’t take a picture, but the whole situation of us three (yes, Zola too) inside this tiny room, undressing as much as we could without causing distress to the other customers, was definitely a scene worth capturing. Not to mention that, after having dried a bit and finished chatting with the ladies around, I took possession of the only little table in the laundry room, turned it into a temporary office, and started sending work emails from the tablet…
But after this, we were mostly blessed with nice and warm-ish weather again, and we enjoyed rolling up and down, from mountain pass to mountain pass via lower plateaus. For about a week our daily ascent was at least 1100 metres… Tough days! But the gorgeous scenery amply repaid for our efforts.

The apex of our ascent was the Pas de Peyrol at 1589 m, with stunning views over the nearby Puy Mary (1787 m). Naturally, without us even knowing it, my route has taken us through the highest road pass of the Massif Central! But it was definitely worth it!