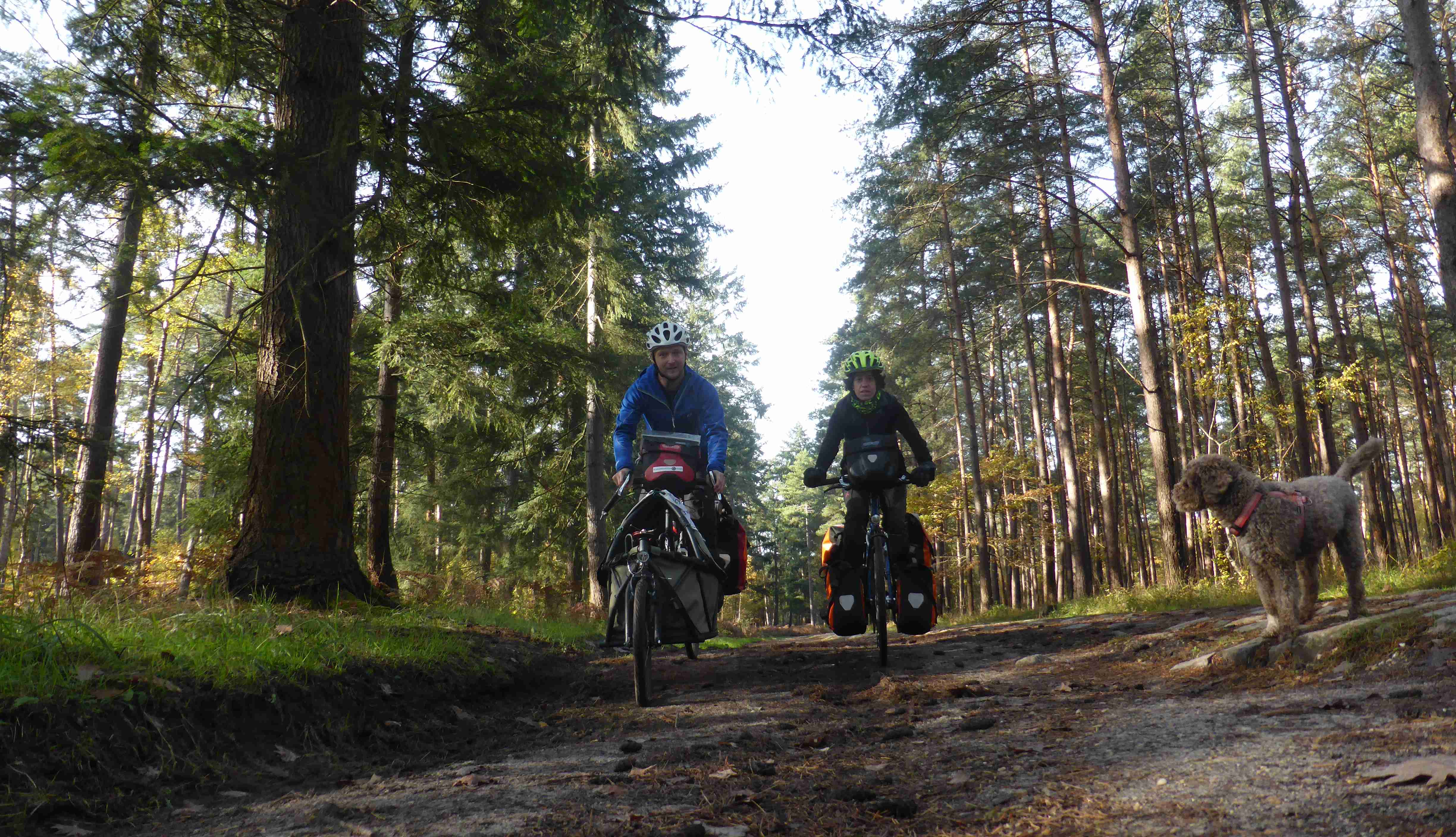 When we took the TGV on the 18th of November to go back to Paris and restart our trip I was not too sure about what we would actually manage to achieve, cycling-wise. During this two-month rest period I had trained a lot, both on and off the bike, to recondition my knee, but just in the last few days before departure I had started feeling some small hints of pain again. Despite fearing a second failure, we decided to try… mainly because we had booked the TGV and we couldn’t leave the bikes in my friend Leo’s flat forever!
On a positive note we managed to pack better this second time, and by cutting down on unessential stuff (we will miss you, titanium whiskey flask!!) we dropped our combined weight by about 7 kg - it would have been 8 kg hadn’t Daniel been so stubborn on the necessity of taking a stool (yes, a stool), but he loves to sit… so be it! Thanks to this huge weight (and volume) saving I was able to use my old smaller panniers again, which also meant that I could be cycling with a full matching set of panniers! The little joys of neurotic cycletourists…

The start (or perhaps I should say the second start…) was really not great. After meeting Leo in Paris and going back to his house in Cergy I developed such a strong headache that I was sick throughout the wonderful dinner that his parents had prepared… Thankfully Daniel took one for the team(!) and dutifully ate enough for both of us. I think Zola may have offered to help too…
On the next day I felt well enough to start cycling, and so we waved goodbye to Leo and his parents and set off to undertake what would be our first bike travel through winter. We really had no idea whether we could do it or not… both the cold and my knee gave us reasons to be doubtful. Fortunately for us, the first few days were some of the sunniest and warmest we could have hoped for, gently acclimatising us to what was to come.

After a couple of nights spent in a warm bed (thanks to warmshowers), we finally got the chance to test our camping equipment in one of the few French campsites that remained open. The owners did seem very puzzled when we asked if we could camp… “But it is cold!” they declared in a strong French accent! In reality, it wasn’t too cold and I was surprised to be able to take off my big down jacket as I slided into my sleeping bag. We slept like babies - Zola included.

During these surprisingly sunny days we found ourselves crossing a series of World War I memorials, dotted along what is known as the “Chemin des Dames”. We stopped at the French and German military graveyards in Cerny-en-Laonnois, and felt overwhelmed by the vast display of countless simple graves. Later on we also came across the impressive site of the Vauclair abbey, which was almost totally destroyed during the war.

Upon cycling further along the top tube, we entered the Ardennes, a less agricultural area of France, characterized by rough terrain and extensive forests. We thus started climbing the first few rolling hills, and I was pleased to find out that my knee seemed to be holding fine! We also got the first few drops of rain, but nothing major and indeed we kept camping without too much of a problem.

It was whilst cycling through the beginning of the Ardennes that we clearly realized how slow we were compared to summer. What represented a normal day before, some 70 to 80 km distance with a 500 to 800 m of ascent, has indeed become seriously tough in winter! And yet we don’t think we lost much fitness - and we are even less loaded than before! The truth is, as we found out reading about it, that winter cycling is intrinsically slower due to higher air density and increased rolling resistance of the tires. Without mentioning the fact that the body obviously struggles more to keep warm… It’s funny that we had never noticed this before, despite cycling every winter in Finland: we always attributed the slower speeds to changing to studded tires…

But there are some positives of winter cycling too. Firstly we don’t sweat so much (I never really did, but Daniel… that’s another story…) and so we can use and re-use and re-re-use our woolen t-shirts and baselayers without causing too much distress to nearby people. Secondly, our panniers double as a natural fridge, where we can store cheese, hummus and yogurt for days… rather than having to eat them within 15 minutes of exiting the supermarket! Thirdly, our outdoor lunch breaks have become very quick and efficient, as nobody likes to get cold hands and feet. Fourthly, Daniel’s and Zola’s combined begging power has reached new levels: our supermarket stops, when I go in to do the shopping, rarely pass without some kind offer of food or money (Daniel is actually upset about this and is desperately trying to learn to say properly “I am not homeless, though, given my appearance, I understand your confusion”). Finally, it is actually a cool experience, and we enjoy the sensation of what feels more like a proper physical and mental challenge. The shorter days also mean that we often end up cycling in the dark, which gives an air of mystery to the places we go through.
The last day in France was stunningly beautiful and we enjoyed splendid views of the Meuse river, especially near the French town of Monthermé. We then followed the windy course of the Semois river to finally enter Belgium, having been more or less dry for an entire week.

At first sight nothing changed upon crossing into Belgium…. Similar rough landscape (a continuation of the Ardennes, of course), comparable houses and still lots of cheery “Bonjour!”, which we love. Yet there were two notable differences: the ubiquitous presence of “Friteries” (basically fast fried food vendors), and a remarkable number of metal cans on the road sides - mainly Jupiler ones, a very cheap and common Belgian beer.

And then it started to rain - not just a light drizzly rainfall or sporadic showers, but proper shitty, heavy and constant rain. This changed everything and it was miserable to wake up under the rain in our first Belgium campsite!

People told us that we were in the rainiest area of Belgium during the rainiest time of the year… oh yeah! It really wasn’t fun to cycle in these conditions. Especially when we understood that our Hestra overgloves were not waterproof, which meant that after about an hour of cycling under the rain our hands would get wet… Let alone the fact that I didn’t follow Daniel’s advice and didn’t take boots! What a mistake! So while Daniel’s feet have been nicely dry in his heavy mountaineering boots, mine have been swimming in two shoe-shaped water containers… oh dear!

Notwithstanding the rain and (my) wet feet, we have had a really pleasant impression of this part of Belgium (known as Wallonia). People have been incredibly friendly, open and generous towards us. Since crossing the border only three days ago, we have met several amazingly kind people who have offered us a shelter for lunch, a warm shower, food and even a bed! One of these - Natalie - explained to us how she tried to perform one good action a day, but after having fed us, washed our clothes, put us to bed and prepared a packed lunch for the next day, she declared that she could be done with her good actions for at least a month! Another one - François - didn’t even look at our faces before pulling over and giving us the address to his house… and upon understanding I recently had knee problems, being an osteopath, he even offered a free medical examination! Honestly, what remarkable country is this Belgium? We are looking forward to seeing more of it!