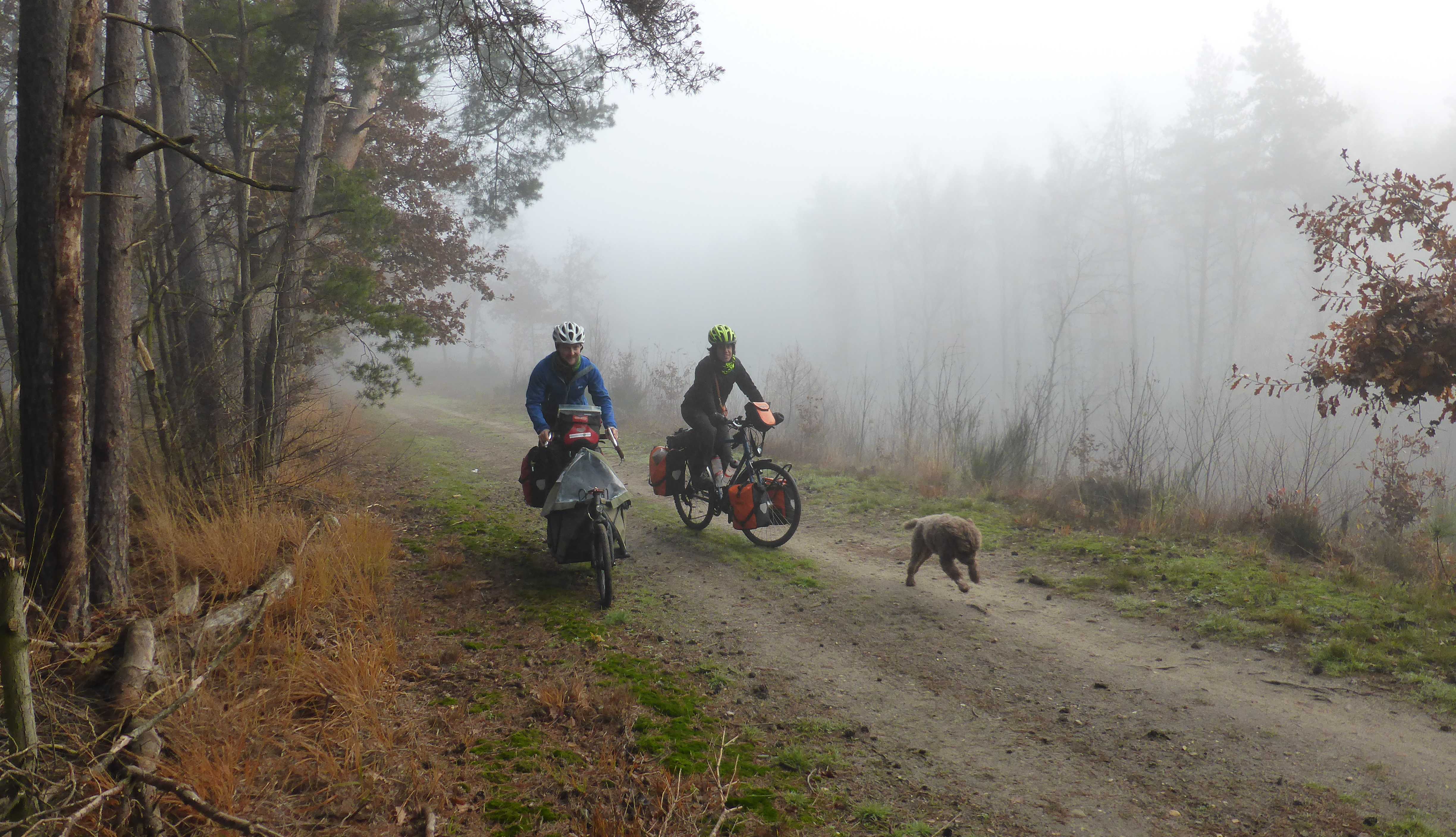 We started tracing the saddle - or rather the seat post - in the small village of Compogne, which rightfully caught much of our attention simply for being also the END to our whole bicycle drawing. It is really a strange feeling that of passing by bike through a random place with the knowledge of having to pass there again in a few months… A feeling that is probably shared only by some privileged foolish people that decide to draw huge shapes with a bicycle.

Like the last few days spent tracing the bicycle top-tube, cycling along the seat post granted us some more beautiful views of the Belgian Ardennes, with dark stone houses set amidst glorious rolling hills. But exactly like in those days, the weather was so truly and unbelievably shit - as in rainy - that we didn’t feel much inspiration to take many pictures…

Upon reaching our first campsite along the seat-tube in Dochamps, we were wet down to the bones and pitched our tent in the dark, under an incessant rain. With camping it doesn’t get much more miserable than that! Actually, it probably does - as we at least could make extensive use of the heated bathroom facilities, beside which we strategically placed our tent. We literally covered every centimetre of accessible radiator area in that bathroom with at least one layer of our clothing/gear. Thankfully nobody seemed to care in this almost completely deserted campsite. Only Zola couldn’t enjoy the benefits of the warm room, as she had to wait outside, under the rain. She kept staring at us through the windows though - her nose intermittently fogging up the glass - while we were busying ourselves with getting comfortable and dry. If she didn’t report animal cruelty then, I guess she never will!
Since cooking under the rain was the least of our desires, we decided to treat ourselves to a nourishing restaurant meal that evening, obviously accompanied by some excellent Belgian beer. Zola finally dried up and fell asleep mid dinner - quite an oddity for the queen of food begging.

With the weather showing no signs of improvement on the following morning, we decided to take a day off. A day that we spent almost entirely inside the campsite reception, since the people there took pity of us… While I sorted out various trip-related stuff, including the usual half dozen emails sent to assorted news outlets hoping to secure some interest with our story, Daniel spent this time designing a new calendar for his grandma, a responsibility that has become increasingly more daunting over the last few years. The content of this calendar has always entirely consisted of family pictures, pretty simple so far. However, the ever increasing size of his own family has resulted in Daniel’s becoming more stressed, year after year, in fear of forgetting someone and being reproached by his grandma… I swear he was less anxious whilst writing his PhD thesis!

And finally it stopped raining. For a bit. And it became cold. So cold that on the following morning we had to wait for the tent flysheet to defrost before packing it away, while Zola experienced drinking from a frozen water bowl for the first time. But the lack of rain changed completely our mood and perspective.

With the hills progressively smoothing down as we rode north and finally blessed with a pale hint of sun, we smoothly glided towards Liège, a relatively big city and a pleasant change after many rural days. Nothing exceptional there to visit, but we were reasonably impressed with the modern architecture of the Liège-Guillemins train station, as well as with the staircase of the Montagne de Bueren, which luckily we didn’t have to climb.

Even in these more urban settings we were fascinated by the open mindedness and kindness of Belgian people. It is not uncommon for us to get cheers of encouragement from passing cars or pedestrians, especially in this cold weather, but we were totally speechless when a car driver passed in front us, all smiles and thumbs up, did a U-turn, approached us and literally filled us with home-made goodies (mmmm… the Belgian waffles!), apologising for not having more and for needing to leave in a rush. Without mentioning the kind lady that, walking her dog through the woods just outside of Liège, found us emerging from our frosty tent and invited us for breakfast at hers. I guess in an equivalent situation my mum would have called the police!

Once left Liège the landscape turned quickly to that of a dull, industrialised flatness all around us. The river Meuse accompanied us for a while towards the border with the Netherlands, which we crossed some 20 km south of Maastricht. Here the roads started to become very trafficky and we could definitely perceive, both by eye and through smelling, a substantial level of air pollution. But our visit through the Netherlands, however brief and doubtlessly incomplete, didn’t fail to leave us hugely impressed with the high standard of cycling infrastructure. Not surprisingly, of course!
For the first time through our journey we didn’t feel like an anomaly… with lots of people of all ages darting fast past us on the most diverse forms of two-wheeled vehicles, we actually felt rather well integrated with the surroundings. Only one aspect of these riders distinguished us from them and poignantly caught my attention: how the hell could it be that the height of our heads, whilst cycling, could barely match the height of their saddles?? Yes, Dutch people are renowned for been tall, and yes, both me and Daniel are indeed a touch short… but still!!
Fitting several Dutch stereotypes, our warmshowers hosts in Brunssum, where we spent our only night in the Netherlands, were also keen (and tall) cyclists as well as hardcore cycletourists, deeply in love with their Dutch-manufactured Santos bikes. They explained to us how in the Netherlands drivers are always assumed to be at fault when involved in a collision with a cyclist. Known as “strict liability”, this law aims to protect more vulnerable road users, and while it may end up with cyclists behaving less responsibly, we loved the idea!

I must admit that we did not enjoy particularly riding through this easternmost part of the saddle. Unlike France and Wallonia (southern Belgium), these areas are densely populated, heavily industrialised, and plagued with intense road traffic and poor air quality. For a few days, it really felt like being back in the Italian Po valley! At least the ubiquitousness of perfectly-maintained cycle lanes allowed us to cycle safely, despite the traffic.
The situation did not improve much along the upper part of the saddle. And with the weather turning seriously awful again, with both rain and heavy wind, we experienced some of the worst days yet. What’s more, my bad knee started sending me confused messages of mixed rigidity/pain, which developed into a bit of an emotional melt down (mainly for me). We decided to stop for a couple of days in an overly luxurious bed and breakfast to rest, warm up, and reassess the situation with a dry mind.

With more calm I was able to realize that I was definitely experiencing some discomfort in one knee, especially when walking downstairs. But after one day of complete rest, and a few focused exercises and kneecap manipulations, I was feeling hopeful again and was ready to restart. It’s probable that my patellofemoral pain syndrome has not quite healed completely yet, and that I have to try and manage it along the way. We will see…
As I mentioned, there was not much to see during this part of the saddle, both in term of landscape and landmarks, with one notable exception: the majestic ruins of the Villers abbey, which dates back to the 12th century.

But at the risk of repeating myself, what really made up for a relatively dull cycling, was once more the experience of meeting truly remarkable people. What we finally realised is that warmshowers is infinitely more than free accommodation (…with a warm shower) and sharing cycling experiences. It is a network - or even better, a community - of mindful, open, selfless people that share similar, unconventional views on life and are brave enough to follow their beliefs and go against the mainstream.
More often than not we have met people that, exactly like us, have started questioning the whole system… that system that seems to be pulling the threads behind our own puppet-like lifestyles, continuously pushing us to achieve more, earn more, consume more, buy more, etc, without even letting us reflect on the fact that we actually may not need, nor want, all that “more”. That system that promotes social inequality, and an ego-centred lifestyle instead of a more empathic and eco-focused one.

So we met Raf, that quit his job to retrieve a slower-paced and more meaningful life, while trying to build a tiny ecological house for himself. We met Luc and Nathalie, that wanted to get rid of their car if only someone could build them a cargo bike to safely transport their cello (Daniel saw a business opportunity here!), and whose son had also quit his job to travel slowly around the world. We met Françoise that, without even knowing us, hid her house keys for us to find, so that we could get shelter before she arrived, having left her humble (but charming) house warm, just for us.

Warmshowers is indeed a beautiful life philosophy, that we totally want to embrace.

With the mind full of these philosophical considerations, we concluded the drawing of the saddle (retracing the seat post) near Compogne again, with the weather playing some bad tricks on us, but also rewarding us with a few hours of sunshine every now and then. Most importantly anyhow, my knee held just fine, giving us no more reason to worry.