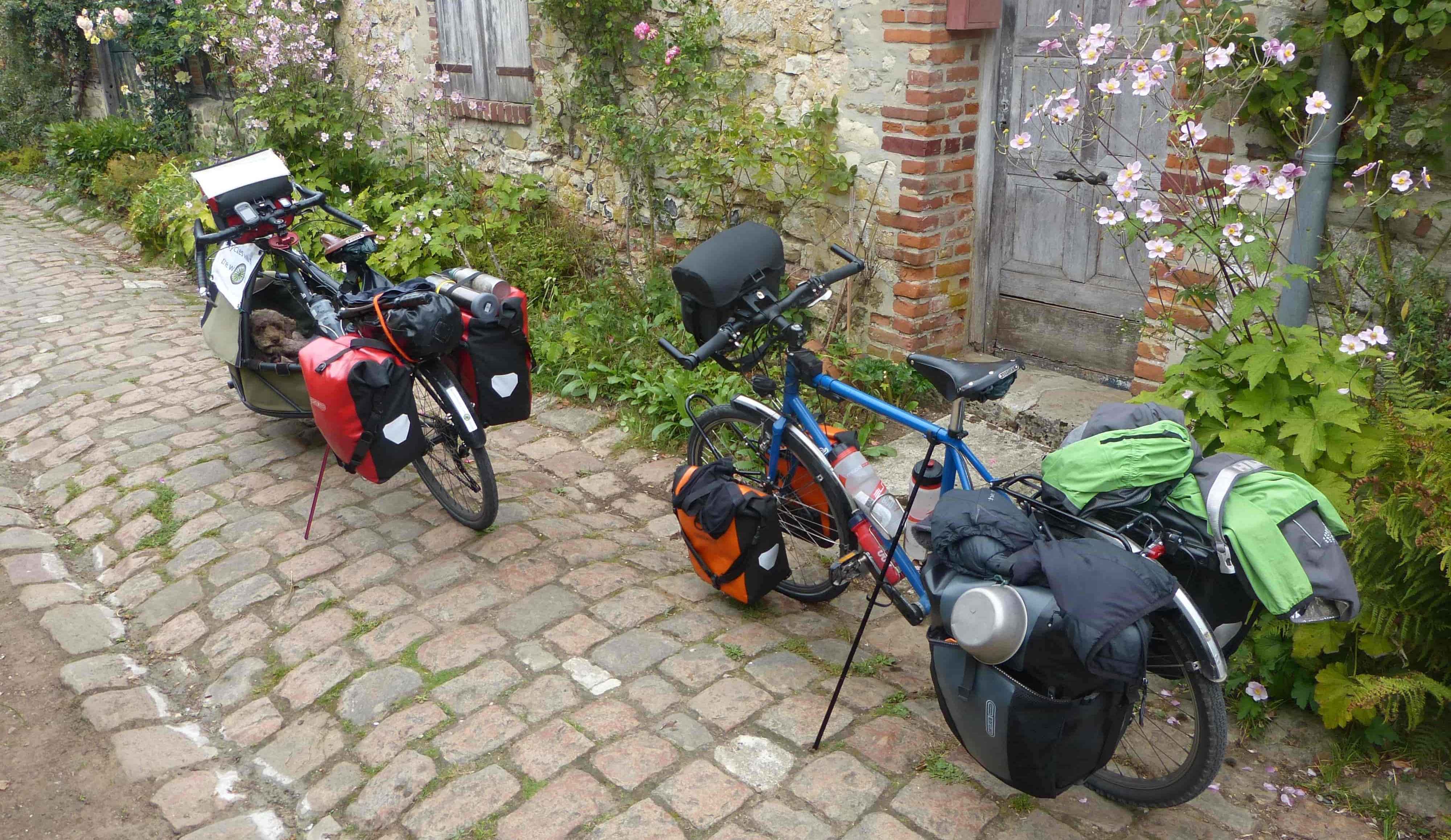 It was difficult to leave the luxury and comforts of Patrick and Françoise’s barn in Saint-Loup-des-Vignes, especially for Zola, but we finally managed to. Before starting to cycle along the dropped handlebar drawing, we actually had to first retrace a bit of the fork, through the Parc du Gâtinais Français, and then cover a few kilometres along the head tube, which went straight through Paris.

The first time I drew the bicycle on Google maps I purposely traced the head tube a bit to the east of Paris, hoping to avoid cycling through the mess of the French capital, but I was not understanding why there was a big bump along the head tube that Google maps didn’t seem happy to straighten for me. Only upon zooming in I realised that I was asking Google to make us cycle in a straight line through the airport of Charles de Gaulle! I re-did everything a couple of times, considering various other constraints, and I ended up with the head tube passing near the Eiffel tower. And so there we went, zigzagging in dense traffic for at least 30 km.

In Paris we had two pleasant and interesting encounters. One was with an Italian couple from Mantova, Cristina and Mauro, who offered us dinner in their campervan and spoilt us all, including Zola, with lots of food and a wonderful sbrisolona tart (which I almost entirely ate). The other one was with Patrizia, who works at the prestigious International Bureau of Weights and Measures (where the famous prototype kilogram is still kept) and was very kind to let us stay and feed us in her luxurious flat near the Bois de Boulogne.

Exiting Paris was not less troublesome than entering it, and we averaged about 10 km/h. At some point I thought I lost my phone, so we even had to go back towards Paris for a few kilometres, hoping to find it along the road, but luckily we realised it was just deeply buried into the mess of my handlebar bag. Loosing my phone would have been quite a tragedy!
Tracing the handlebar took us through a vast proportion of Normandy, and while the most interesting touristic attractions are along the coast (which we didn’t reach), we managed nonetheless to discover some little gems in the inland. Gerberoy, another member of the “Les plus beaux villages de France” (The most beautiful villages of France) association, was my favourite: a handful of timber-framed houses, uneven cobbled lanes and pastel-coloured roses that granted a multitude of picturesque views. I literally couldn’t stop taking pictures! Lyons-la-Forêt was another lovely village, whose most notable sight was a 17th-century covered market in the main square. In Pont-de-l’Arche instead we visited the church of Notre-Dame-des-Arts, built in a flamboyant Gothic style and richly decorated.

Since the original handlebar route didn’t take us through many campsites, we decided to translate it north by about 15-20 km, where we had more sleeping options. But even doing so we struggled to find a camping place each night and thus we decided to try and ask for hospitality through warmshowers, a huge community of cycle-tourists that are happy to provide free support with whatever one may need (accommodation, food, and naturally warm showers). We had already attempted to use warmshowers in Switzerland, due to the high cost of some Swiss campsites, but we had little luck, as all our requests got rejected for some reason or another. So we were not too hopeful when we tried again in Normandy… But we were wrong! We asked hospitality on two occasions, with only a one-day notice, and we got accepted without any problem!
In this way we met Philippe and Sandrine, and their son Etan - an incredibly lovely and happy family that treated us with amazing hospitality. Through speaking to them we learnt a lot about guide dog training (they were hosting one of these dogs during week-ends) and beekeeping, a hobby that Etan had recently taken up with the help of his dad. This was so interesting for me! I have always been fascinated by beekeeping and I would love to try it myself if we manage to buy some land in the future. For breakfast we had plenty of honey and pollen, and since we liked it so much, they gave a full jar to take with us. Such kindness!
Our second warmshower stay, a few days later, was no less pleasant. This time we met Paulin and Alice, a young couple of teachers, extremely layed back and friendly. Their cycle-touring style was somewhat the opposite of the minimalistic bikepacking trend that is so fashionable these days, since Paulin told us how he liked to take a trailer full of stuff (including chairs!) during their trips. He was so passionate about these Helinox camping chairs that I fear Daniel got a little too much inspiration from him… I hope this will not result in me having to carry a full 960g of chair! As if we didn’t already have some extra weight…

Towards the end of the handlebar we found a cheap municipal campsite that featured a little indoor room, equipped with a table and two chairs near an electric plug - the perfect spot for us to get some writing done! We decided to stay there for two days, in order to renew our efforts to publicise our trip and, in my case, to send some work-related emails again (I wonder how long it will take for my research job to stop hunting me). After securing some initial interest from a BBC journalist, of which we were absolutely thrilled, we eventually got nowhere… Frustrating, but we will keep trying!
It was during this rest/writing day that I started to notice something funny was going on with my knees: I mainly felt some stiffness, but even some small degree of pain, when bending my legs to sit on the floor. I didn’t pay too much attention to it - after all, a bit of stiffness could be very normal after having cycled almost 3700 km.
The next day we finished the handlebar, cycling across the forest of Rambouillet. Beautiful paths in the middle of rich vegetation, which reminded us a bit of Finnish forests. Zola loved it, as she could run off lead for a long time, but it was tough going for us - especially when we got stuck in sand and had to push the bikes for a couple of kilometres!

Through the forest my knee pain became noticeable also whilst cycling and we started to get worried. We continued anyhow towards Auvers-sur-Oise (famous for its association with van Gogh) and we resolved to stay there for a few days, in a campsite, to evaluate how to proceed. Furthermore, Daniel’s grandmother had passed away a few weeks ago and this stop near Paris gave Daniel the perfect opportunity to catch a Eurostar and attend the funeral in Halifax (UK). It was a few miserable days for both of us…

In the meantime we found out that the Global Climate Strike, inspired by the Fridays For Future international movement, would take place in Paris on the 20th of September and we decided to attend. The demonstration, which started from Place de la Nation, was the biggest event of the sort that we had ever taken part in: thousands of young people, and some not so young, were marching slowly but steadily, chanting, booing, many holding those protest signs, written on cardboard, that have become an icon of the movement. It was beautiful! The enthusiasm was high and the atmosphere cheerful - one could really sense an overwhelming feeling of hope for the future.

These 20th - 27th September strikes, which have been mostly organised by 350.org, have been the largest climate strikes in world history, with a global participation amounting to about 6 million people - as estimated by the Guardian. And we were very proud to have been two of those people (and one dog)! Indeed, it had been such an incredible experience that Daniel managed to forget the fact that he had been mistaken for an homeless man, earlier in the day, and even offered some scrap food (thank you to the kind lady that made this offer). Although maybe he didn’t forget completely as he did go for a good wash and a full shave on the next day…

After the strike I got in contact with my Romanian friend Leo and, upon hearing of our difficult situation, he immediately offered us hospitality in his flat in Cergy. Living under the same roof with Leo, even if for a few days, brought me back by about 15 years… when me and him were studying at the University in Pavia, eating kebabs and sharing a horrible flat, together with a bunch of cockroaches! And like in the old times, hearing Leo converse so eloquently and expertly on the most disparate topics of culture and arts, from German Romanticism to Hungarian composers to contemporary political movements, reminded me how illiterate and uncultured I am. Also Daniel suffered a bit when he understood that Leo could speak fluently in five different languages… he is still struggling to master Italian (at home, he can often be heard yelling “fuck you, subjunctive!”).

Leo was great as usual and took good care of us. He arranged for me to meet his doctor and start physiotherapy in the nearby town of Pontoise. As we feared, my knee pain was a typical sign of a patellofemoral pain syndrome, very common among runners and cyclists, which unfortunately requires some time and dedication to recover. We thus decided to suspend our trip, take a TGV and go back home in Italy. It was a tough choice but we agreed it was the most sensible one. We arrived back home yesterday, but the bikes have remained in Leo’s flat in Cergy, because from there we will resume our trip whenever my knees will be up for it. And since every cloud has a silver lining, thanks to my knees failure I got back in touch with Leo… not all is bad!